As a big fan of The Hummingbird Bakery Cookbook I had been eagerly awaiting their next recipe book called Cake Days. It was described as “recipes to make every day special”.  I bought it as soon as it came out some months ago now and so far it has not disappointed me.   Cake Days is crammed with cupcakes, whoopie pies, muffins and special occasion cakes. All split into handy sections; Spring, Mother’s and Father’s Days, Halloween, Easter, Bonfire Night etc.
There are loads of recipes and beautiful pictures to accompany them and the best bit is they show you how to ice the cupcakes their way by showing you in pictures, which is really handy for anyone who has attempted to try to recreate their signature swirl that you see in their cookbooks.  Well worth looking at!!
There are a few good recipes for Whoopie Pies which seem to be enjoying a whole craze all to themselves.  I have to admit though I am not a big fan of them to be honest.
There are a few cake loafs and layer cakes as well. The coffee and chocolate loaf was very easy to make as I did it at the weekend and it tastes lovely.  I split the mixture into 2 loaf tins quite easily but it is more like a thick sponge mixture rather than a batter as the recipe states which suggested to me that it would be runnier. Nonetheless, it’s still delicious and rather than being overpowering in coffee flavour (which I am not a fan of), it subtly brings out the rich chocolaty flavour of the cocoa in the cake.
Chief Taster, Jess stated it would go perfectly with a cup of tea or as a dessert with cream and was very pleased when I gave her half the loaf to take home and Ve, Chief Taster Number 2 said, and I quote,…..”Amazing and in heaven!!” (think she liked it!!).  It’s a very light cake and lovely eaten just slightly warm.  Me & the OH also had it with some Chantilly cream that I made (whipping cream, icing sugar & vanilla whipped up) and that was just as nice as well.


Will post the recipe tomorrow as I forgot to jot down the ingredients from the recipe! (Duh!!)** 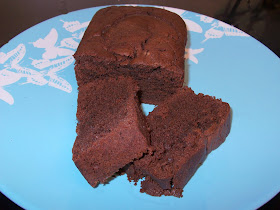 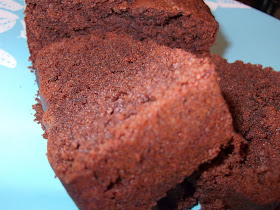 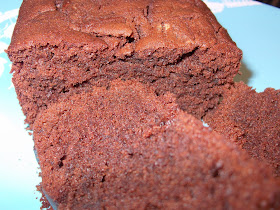 130g plain flour
190g soft light brown sugar (or light muscavado if you prefer)
3 large eggs
60g cocoa powder
1 teaspoon baking powder
20ml milk
1 tablespoon strong coffee (brewed and cooled)
Loaf tin*
* I split this mixture between 2 loaf tins to get 2 slightly smaller cakes, you can of course just fill one loaf tin.  I also use loaf tin liners as I find they are far easier to get the cakes out and its less faffing with greaseproof paper etc!
Pre-heat the oven to 170°C (I do it to 160°C as I have a fan assisted oven).  Then grease and flour your loaf tin(s) if you are not using liners.
Cream the butter and sugar together in a freestanding mixer until pale and fluffy.  Add the eggs one at a time and making sure you scape down the sides of the bowl after each addition and mix well.  The mixture should be quite fluffy and almost 'moussey' when you have finished.
Measure the milk and add the cooled coffee to it.  Set aside.
Add the dry ingredients and two batches, alternating with the coffee mixture.  Mix on a low speed until everything is incorporated, remembering to scrape down the sides of the bowl.

Once everything is well mixed, increase the speed to medium-high and give a quick blitz to make sure you have a smooth batter.  This mixture is not very liquidy and is more like a regular sponge batter.  Spoon into the tin(s) and bake for one hour or until a knife comes out clean when inserted into the middle of the cake.  Allow to cool for a while in the tin before turning out onto a wire rack to cool completely.
This is lovely eaten slightly warm.
Buffycat Cake Designs at 16:38
Share